St George’s Park is a £105m facility, set in 330-acres of Staffordshire countryside, is the home to England’s 28 national teams. With 13 outdoor pitches, including a replica of the Wembley surface, a full-size indoor 3G pitch, a suite of rehabilitation and sports science areas, and an indoor futsal sports hall, St. George’s Park provides world-class facilities for all England teams ahead of international fixtures. It is also home to FA Education, with sport science and performance integral to the world class facilities. (You may also bump in to Michael Oliver on a soggy Monday whilst on the way to gym, who knows).

So why start here? Well, Burton on Trent is my old home town. I used to live within 5 minutes drive from the facilities and have been on a number of refresher courses at St George’s.

I also thought with the World cup round the corner why not look to do something slightly different.

Why not look at guiding England in the 2018 World Cup. And if I can manage to meet expectation and don’t get sacked why not try to raise the countries reputation from the ground up. This would mean taking responsibility of the lowest level to the full international side. In FM this would mean taking the reigns of the Under 19’s, Under 21’s and the full squad.

I can hear the question why being asked…

Firstly some history…. (Via WikiPedia)

The England team before playing a match against Scotland at Richmond in 1893.

The England national football team is the joint-oldest in the world; it was formed at the same time as Scotland. A representative match between England and Scotland was played on 5 March 1870, having been organised by the Football Association. A return fixture was organised by representatives of Scottish football teams on 30 November 1872.

This match, played at Hamilton Crescent in Scotland, is viewed as the first official international football match, because the two teams were independently selected and operated, rather than being the work of a single football association.[4] Over the next forty years, England played exclusively with the other three Home Nations—Scotland, Wales and Ireland—in the British Home Championship.

At first, England had no permanent home stadium. They joined FIFA in 1906 and played their first ever games against countries other than the Home Nations on a tour of Central Europe in 1908. Wembley Stadium was opened in 1923 and became their home ground. The relationship between England and FIFA became strained, and this resulted in their departure from FIFA in 1928, before they rejoined in 1946. As a result, they did not compete in a World Cup until 1950, in which they were beaten in a 1–0 defeat by the United States, failing to get past the first round in one of the most embarrassing defeats in the team’s history.[5]

Their first ever defeat on home soil to a foreign team was a 0–2 loss to the Republic of Ireland, on 21 September 1949 at Goodison Park. A 6–3 loss in 1953 to Hungary, was their second defeat by a foreign team at Wembley. In the return match in Budapest, Hungary won 7–1. This stands as England’s largest ever defeat. After the game, a bewildered Syd Owen said, “it was like playing men from outer space”.[6] In the 1954 FIFA World Cup, England reached the quarter-finals for the first time, and lost 4–2 to reigning champions Uruguay. 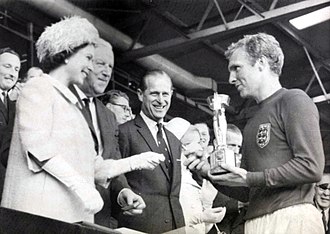 Although Walter Winterbottom was appointed as England’s first ever full-time manager in 1946, the team was still picked by a committee until Alf Ramsey took over in 1963. The 1966 FIFA World Cup was hosted in England and Ramsey guided England to victory with a 4–2 win against West Germany after extra time in the final, during which Geoff Hurst famously scored a hat-trick. In UEFA Euro 1968, the team reached the semi-finals for the first time, being eliminated by Yugoslavia.

England qualified for the 1970 FIFA World Cup in Mexico as reigning champions, and reached the quarter-finals, where they were knocked out by West Germany. England had been 2–0 up, but were eventually beaten 3–2 after extra time. They failed in qualification for the 1974, leading to Ramsey’s dismissal, and 1978 FIFA World Cups. Under Ron Greenwood, they managed to qualify for the 1982 FIFA World Cup in Spain (the first time competitively since 1962); despite not losing a game, they were eliminated in the second group stage.

The team under Bobby Robson fared better as England reached the quarter-finals of the 1986 FIFA World Cup, losing 2–1 to Argentina in a game made famous by two goals by Maradona for very contrasting reasons, before losing every match in UEFA Euro 1988. They next went on to achieve their second best result in the 1990 FIFA World Cup by finishing fourth – losing again to West Germany in a semi-final finishing 1–1 after extra time, then 3–4 in England’s first penalty shoot-out.

Despite losing to Italy in the third place play-off, the members of the England team were given bronze medals identical to the Italians’. The England team of 1990 were welcomed home as heroes and thousands of people lined the streets, for a spectacular open-top bus parade. However, the team did not win any matches in UEFA Euro 1992, drawing with tournament winners Denmark, and later with France, before being eliminated by host nation Sweden.

The 1990s saw four England managers, each in the role for a relatively brief period. Graham Taylor was Robson’s successor, but resigned after England failed to qualify for the 1994 FIFA World Cup. At UEFA Euro 1996, held in England, Terry Venables led England, equalling their best performance at a European Championship, reaching the semi-finals as they did in 1968.

He resigned following investigations into his financial activities.[7] His successor, Glenn Hoddle, similarly left the job for non-footballing reasons after just one international tournament – the 1998 FIFA World Cup — in which England were eliminated in the second round again by Argentina and again on penalties (after a 2–2 draw). Following Hoddle’s departure, Kevin Keegan took England to UEFA Euro 2000, but performances were disappointing and he resigned shortly afterwards. 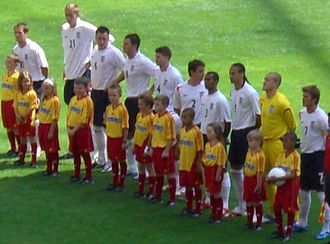 The England team during the 2006 FIFA World Cup.

Sven-Göran Eriksson took charge of the team between 2001 and 2006, and was the first non-English manager of England. He guided England to the quarter-finals of the 2002 FIFA World Cup, UEFA Euro 2004, and the 2006 FIFA World Cup. England lost only five competitive matches during the Swede’s tenure, and England rose to number four in the world ranking under his guidance. Eriksson’s contract was extended by the Football Association by two years, to include UEFA Euro 2008. However, it was terminated by them at the 2006 FIFA World Cup’s conclusion.

Steve McClaren was then appointed as head coach, and was sacked unanimously by The Football Association on 22 November 2007, after failing to get the team to Euro 2008. The following month, he was replaced by a second foreign manager, Italian Fabio Capello, whose experience included stints at Juventus and Real Madrid.

England won all but one of their qualifying games for the 2010 FIFA World Cup, but at the tournament itself, England drew their opening two games; this led to questions about the team’s spirit, tactics and ability to handle pressure.[8] They progressed to the next round, however, where they were beaten 4–1 by Germany, their heaviest defeat in a World Cup finals tournament match.

In February 2012, Capello resigned from his role as England manager, following a disagreement with the FA over their request to remove John Terry from team captaincy after accusations of racial abuse concerning the player.[9] Following this, there was media speculation that Harry Redknapp would take the job. However, on 1 May 2012, Roy Hodgson was announced as the new manager, just six weeks before UEFA Euro 2012.[10] England managed to finish top of their group, winning two and drawing one of their fixtures, but exited the Championships in the quarter-finals via a penalty shoot-out, this time to Italy.[11]

In the 2014 FIFA World Cup, England were eliminated at the group stage for the first time since the 1958 World Cup, and the first time at a major tournament since Euro 2000.[12] England’s points total of one from three matches was its worst ever in the World Cup, obtaining one point from drawing against Costa Rica in their last match.[13] England qualified for UEFA Euro 2016, with 10 wins from 10 qualifying matches,[14] but were ultimately eliminated in the Round of 16, losing 2–1 to Iceland, for the first time since the 2010 World Cup.[15] Hodgson resigned as manager immediately,[16] and just under a month later was replaced by Sam Allardyce.[17] After only 67 days Allardyce resigned from his managerial post by mutual agreement, after alleged breach of rules of the FA, making him the shortest serving permanent England manager. However, because his sole game as England manager was a 1-0 victory against Slovakia, he left the job with a 100% win rate, the best any England manager in history has ever had.[18]

That same day, 27 September 2016, Gareth Southgate left his role as manager for the England under-21 team and was put in temporary charge of the national team until 15 November that year.[19] On 30 November 2016, Southgate was appointed as permanent England manager on a four-year contract.[20]

However after Pizza hut-gate Gareth Southgate was ejected from his role at the FA. It was believed that Gareth, who had been in remission from “pizza” since the late 1990’s fell off the wagon and found himself in “deep-pan” trouble with Chris Waddle and Stuart Pearce once again. All three gentlemen had been found hassling Pizza Hut staff in the Wembley branch during eat all you can lunch. Waddle and Pearce were heard laughing at Southgate and goading staff like they were school boys. Southgate had been seen wearing a paper bag over his head in an attempt to avert the attention of the FA. After consuming a large amount of doughballs it is though Southgate had taken off his disguise and then broke his nose walking into a post under the influence of ham and pineapple toppings. This time the FA thought that Gareth had gone a “slice” too far, and that they had to cut their “crust” accordingly with Southgate.

With all of that out of the way you can now see why the England job is available and ultimately I would like to see continuity of what has been happening at youth level. So hopefully by holding the main role for the three jobs I will be able to install my own playing style on every player that wears an England shirt. And have a greater influence of the young English players in FM and develop them ready for full honours.

Right….I’m off to look at the squads and see if I can divide opinion just like in real life….